*Warning, this game is NSFS (not safe for school)* 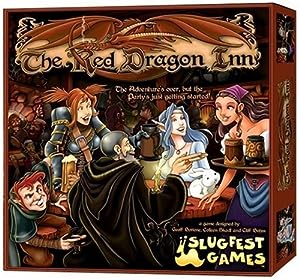 I’m going to take a step back from my role as an educator, and just share a game that I really find fun. While I’m not going to do my usual school analysis (while there is a ton in here, it just isn’t a game I would bring to school), I am going to say that you could set up the context with your own kids and decide on what is appropriate.

Who doesn’t love drinking/gambling/tipping all without actually spending money or waking up with a hangover? Red Dragon Inn (and it’s subsequent expansions) puts you in the role of a magical being (one that wouldn’t be out of place in a WoW game) at the end of a long day. You sit down with your pals and some pent up aggression, and you commence a subtle (or more overt) competition to be the last one standing at the end of the night. You are eliminated in one of two ways – you run out of money (through gambling or paying for drinks), or you pass out (when your alcohol meter passes your fortitude meter). In the middle you have attacks and defenses for your character as you attempt to be that last person around. The art is well done, and the whimsy of the attacks/defenses means that it pays to play with people who shout out the name of their card as it is being laid. This game is a lot of fun, and the people I have played with get really attached to their characters.